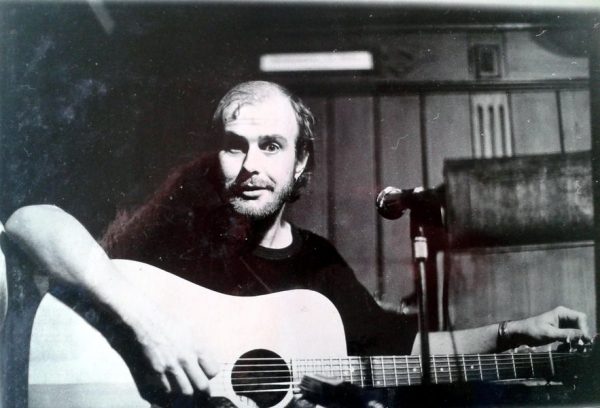 1976, a trip to Holland with the intention of getting away from the English Folk Maffia Scene which was getting me absolutely nowhere and beginning to piss me right off.

Spring 1976 saw me heading off to Holland in a Mini Moke with a guitar and a couple of addresses in Amsterdam with my good Irish friend Kieran Halpin. Met up with a friend Mike Silver, who lived on a house boat on the Singel canal. He had a baby grand piano on board, I was very impressed. He gave us a few gigs to check out, the first being The Folk Fairport on the Prinsengracht, which became our musical home and for many years my favourite haunt.

In our travels met Mark & Maggie from Coventry, lovely mad people, her brother was the drummer in the “Specials” and they lived on a house boat which they said we were very welcome to pitch our tent on the top…so got the tent out, nailed the guy ropes down on the roof, sorted.

It quickly became apparent that they were running back dope to the UK and went off on different days, never together because they were in love and were afraid of being busted and not been able to help one another. So, if they were both gone, we would look after the boat and in the mean time arrange gigs around the town.

Now Amsterdam can be quite a confusing place to get around particularly in the centre as it’s all based around the canals arranged in a semi circular fashion, so in the beginning you’re never quitw sure where you are. Mark and Maggie were back home one day and asked us if we wanted some speed…go on then.

Now, I’d done a bit of speed before, but was always a bit weary, a bad thing to get used to, but now and again ok, just used to dab my finger in what was on offer and not go daft. Mark gave us two “Speed Bombs”, cigarette papers full of the stuff twisted into a little ball and said swallow, which we did, no problem, and headed down to the Adam & Eve for our gig.

Not good for me, I started feeling a bit strange, my scalp felt like something was crawling across it, not happy, asked Kieran how he was doing and he was the same, so now I’m not so worried, few beers, first set then on and on and on, we played until 6.00 am or more then went out for breakfast somewhere in the red light district, stayed up all the next day, tried to sleep to no avail, back down the Adam & Eve 9.00 pm for the next gig, feeling like shit and I have to play in an hour. 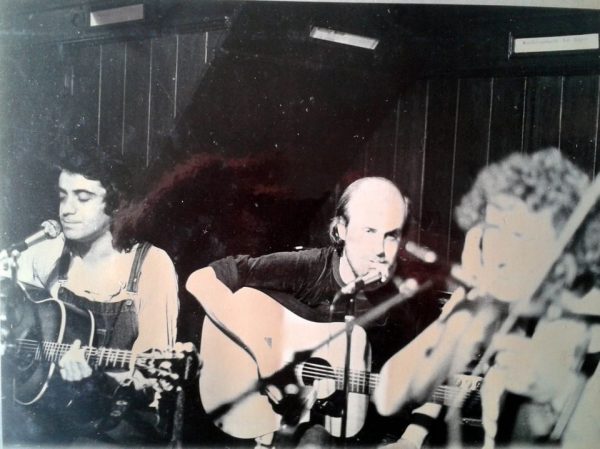 Sat at the bar and Simon, a guy who drove for the legendary “Magic Bus” company and did the Amsterdam to Morocco run every two or three weeks, two drivers, basically non stop and knew everything there was to know about uppers and downers, asks me if I’m ok, I say I’ve felt better. ‘Take these…’. Roche 10mg Valium. Fine, go right through the night and beyond, finally crashing 48 hours later on. We were young. Spent three or four weeks playing and arranging gigs, then took off to Germany, Kieran had a contact in Cologne, where we ended up busking in the day and auditioning for gigs at night.

1976 was the long hot summer, on our return to the UKthe country side was burned brown, almost like southern Spain, never seen England like that, headed to the Cambridge Folk Festival where I saw John Cooper Clarke for the first time with four strange Americans, one of whom played rather good five string banjo, another, Perry Tillman Hodgkins excellent piano, flute, saxophone and vibes (who I spend the next four years playing with). Bloody Americans.

Then on up to what I suppose you would call was a small makeshift commune in Bubwith, near Selby. Not for me the communal life, but had a laugh sitting naked at the dinner table a couple of times stoned, found a gold wedding ring in the barn completely by chance and got 25 for it back in Leeds which I’ve always felt a bit guilty about as I didn’t tell anyone.

As October began to chill my thoughts and the prospect of Winter loomed, we went back over and did all the gigs we’d arranged, on completion Kieran went back to Ireland I think, and I stayed the next 10 years.

I’ve always been fascinated and troubled why talented, good young people seem to die by their own hand or violation without knowing the difference or caring and I’ve come to a sort of musing but no conclusion. There is sometimes no choice in this matter of being troubled, it’s neither black or white, sometimes different shades of grey are introduced to help with excuses along the way, but fundamentally we people aremade up of something quite difficult, some of us are mad people who have gone over the edge of ridiculous and thought nothing of it, drank till it hurt, smoked and coughed as the only means of exercise and then laughed at the whole damn thing. It catches up.